Othello : A Minute to Learn, A Lifetime to Master 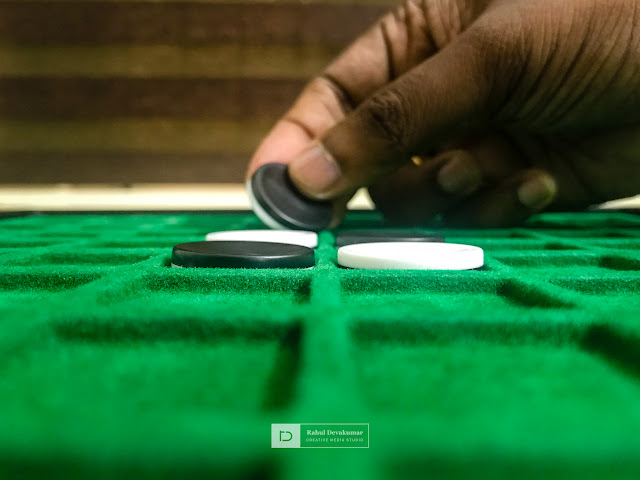 Strategy board games were played nearly in all societies and cultures throughout history. There are different styles and genres of board games. These are based on chances or strategies and the goal will be to outwit your opponent. However later on, more and more leisure games were also added to the list of board games. Even though video games may seem more engaging, they get obsolete once newer or advanced games or gaming consoles are launched. However this is not the case with the board games, they stay eternal. They are so humble and can be played still today even though they were founded thousands of years back.
Here is one such strategy board game which was invented in the 1800s and was modified with a few more additions or a variation of the original in the 1970s. The board game which we are about to review is Othello. Othello is a game which can be played with two players on a 8x8 board. There are sixty four identical discs which is white on one side and black on the other side. Players take turns placing these discs on the board. Each player picks a colour and plays with the assigned colour facing up. When your disc is placed across the same colour in a straight line, it can be turned over to the current player's colour ( We will talk about the game play later in the blog. ). The objective is to have a majority of discs when the last playable empty square is filled.
Othello is a modified or a variant of the original game called Reversi. Original Reversi was claimed to be invented back in the 1880s and the game was very popular in England. The modernised version of Reversi is Othello, which has got a rule set which is even used for international tournaments. The game’s name was derived from Othello, a play by Skakespeare. The discs represent the drama between Othello (who was black) and his wife Desdemona (who was white).
The Othello set we bought is from Funskool. It includes a game board with 64 reversible discs. This version has got attached disc holders on either side which helps to organize and play the game effectively. The quality of discs and the board is really good. The board is made of a pressed coarse woollen cloth on top of the plastic board. 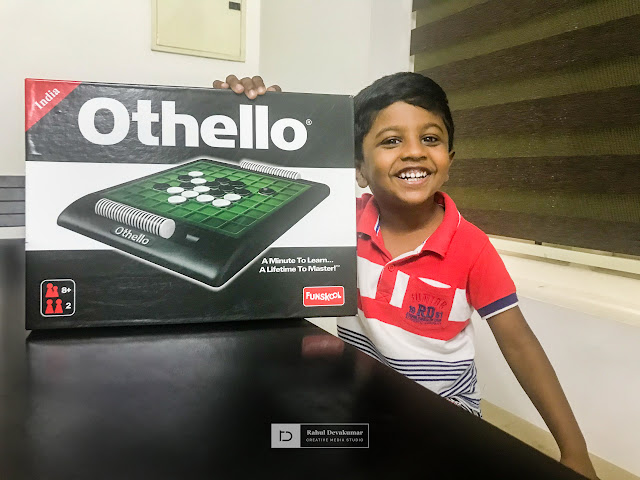 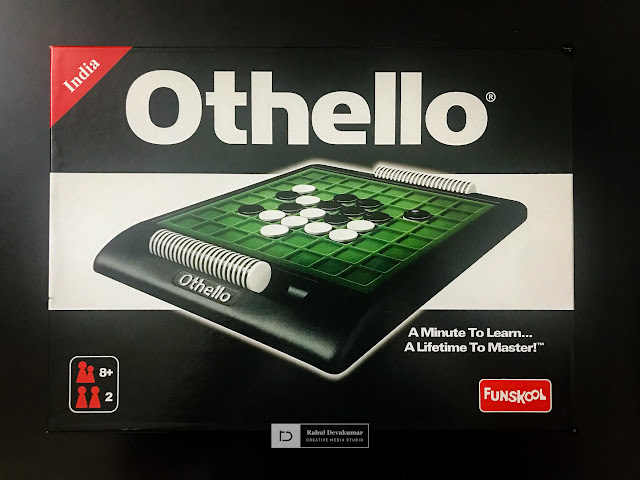 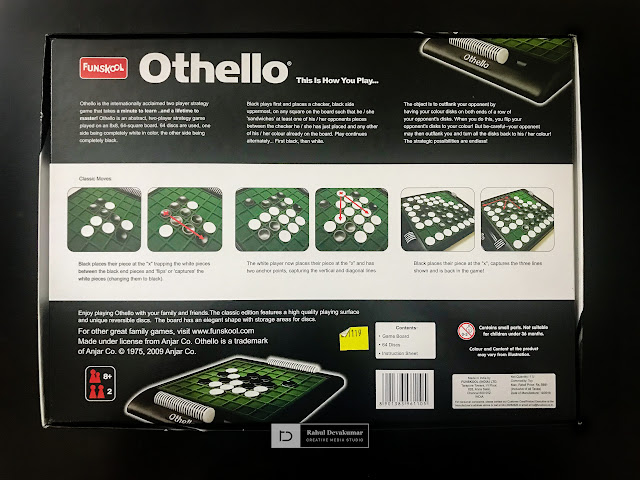 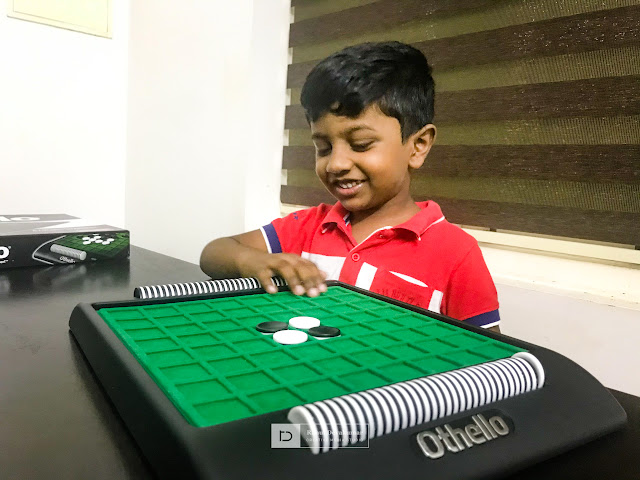 The game is very simple, and would take two minutes to learn and a lifetime to master. The lead can change from turn to turn, it's all the strategy and planning which helps to win the game. One of the two players would pick the white side of the disc and the other would pick the black side. Then each player gets a turn where he could play his disc on the board, blocking the opponent's discs in between his discs. Once he has a straight or diagonal line, the opponent's discs between his newly placed disc and his same colour disc on the other end, he could turn his opponent's discs to match his disc colour. Thus the person with the maximum set of discs on the board at the end wins. The aim would be to block and twirl your opponents discs to win. Each time you play, you could plan and execute the best options and strategies to win with the lowest number of chances. The game can end when one player is not able to make any more moves or when the board is fully occupied. The best part is, if you are out of discs, the opponent should provide theirs so you could proceed further. Once you keep playing Othello you will be more familiar and strategies will start to pop. Always take advantage by owning a corner so that you could protect yourself from getting attacked, i.e. your opponent can't block your discs from either side. Plan your moves ahead and make your opponent place discs where you would like to. In other words, you will see moves ahead so that your opponent put discs where you want it to be. 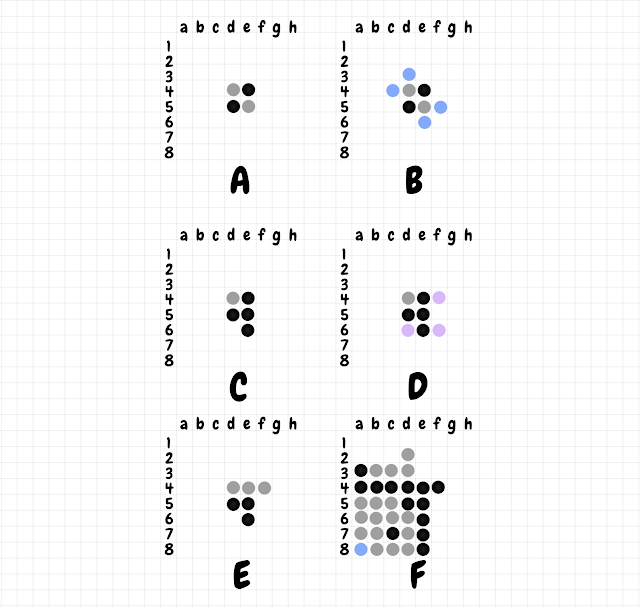 The dark player moves first. The above image A, represents the starting position of the game. Now the dark side can place a disc on a straight line ( diagonal, horizontal or vertical ) in such a way that there are one or more continuous white discs in between. The initial options are shown in the image B above. For the first move, dark has four options: position 3d, 4c, 5f and 6e as shown in image B. Let's say the player choose the disc to be placed at 6e, hence he could twirl the white disc at 5e to black as shown in image C above. A valid move is where at least one disc is flipped over. In this example, the player after placing black disc, turns over the white discs ( or in some cases it will be a chain of discs ) by capturing the whites.
Now the other player needs to make the move. The same rules apply, the player can place his disc in a manner to capture the other colour discs. In image D, the options are shown for the white player side, he could possibly place his white disc on 4f, 6d or 6f. Let's assume the player chose to place his disc on position 4f, he lays his white disc and flips the black disc to his colour. Image E, shows the board once the white player finishes his turn.
Now this continues in an alternate manner until the finishing move. As the game progresses, the players can place a disc in such a way that he could get two or three capture lines (i.e. if he places in position 8a grid in image F, as shown above he could flip discs in all three directions vertical, horizontal and diagonal. He could flip to black discs in positions 8b, 8c, 8d in horizontal followed by 5a, 6a, 7a vertical grid positions and diagonal 7b, 6c positions. ). The game is simple yet too complex, learn it and play it to master it. If one player cannot make a valid move he could pass it to the next player, however if none of the players can make a move then the game ends. 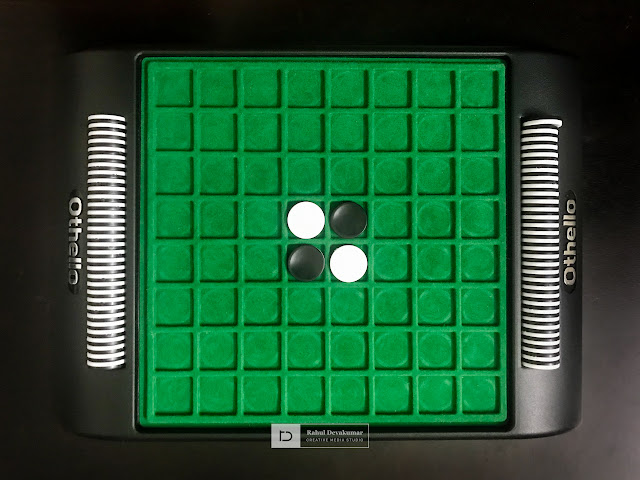 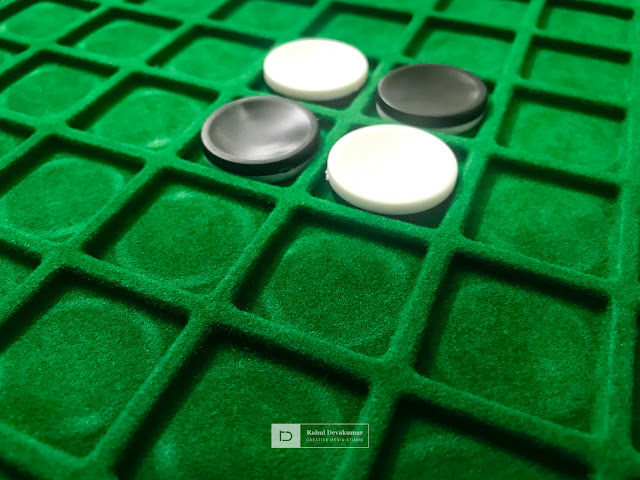 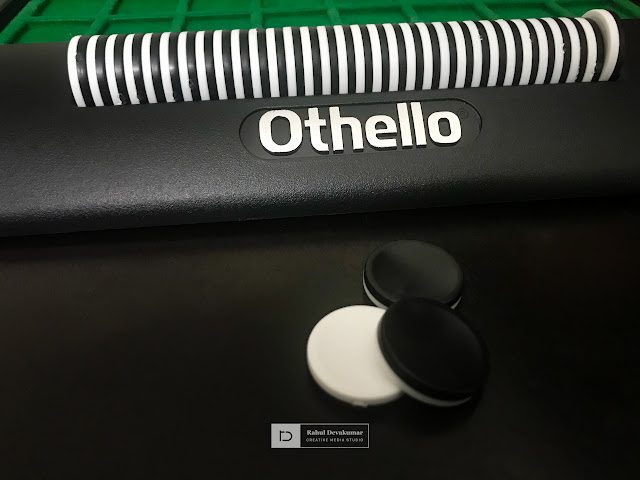 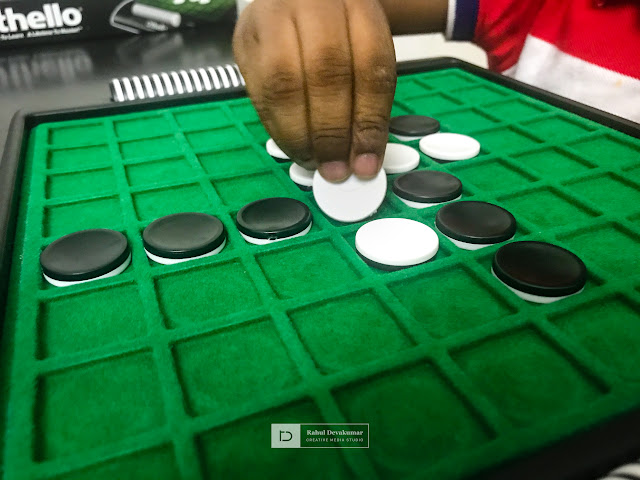 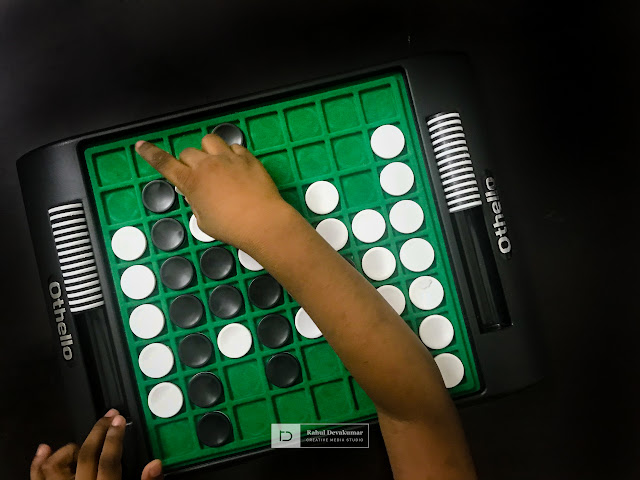 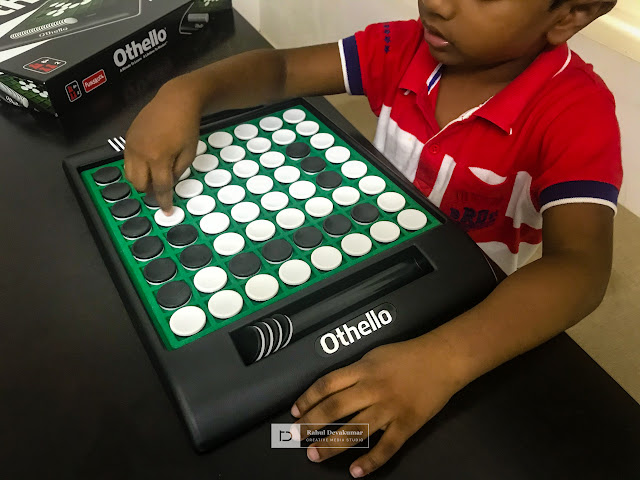 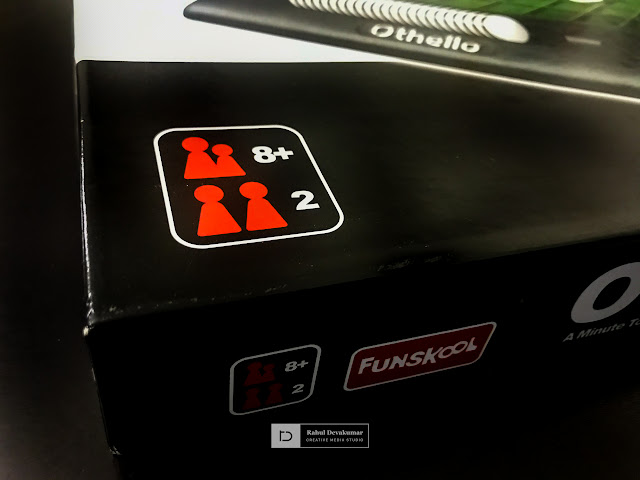 Strategy board games help kids and encourage them to think creatively. Also gives more insight on planning the moves and helps them learn the endless strategic possibilities of playing these board games.
When kids play such games it allows them to think outside the box and improves the creativity skills. Each time you play the game, you would learn to implement new strategies and understand the rules to exploit the chances by implementing different strategies. This boosts lateral thinking and that would definitely help them win competitive exams for their future careers. Even though this game is marked for kids above age 8, our Zavi started playing at his age 4. He loves it and enjoys playing with us. A minute to learn and a lifetime to master..!
*all images were shot with iphone7