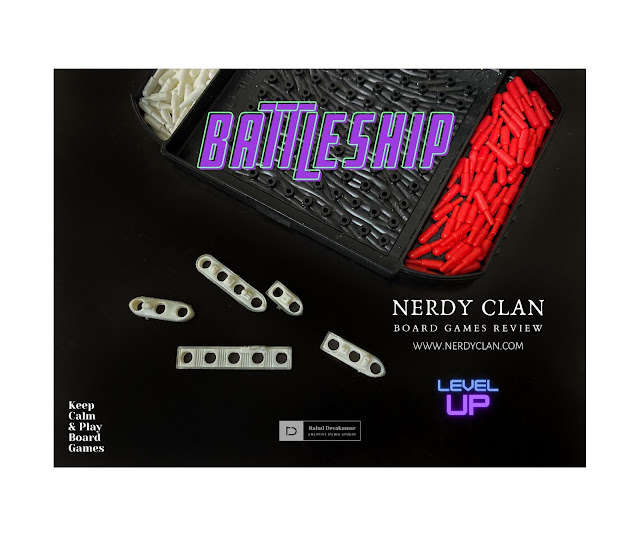 Battleship is a typical strategy game for two players. It is more of a head to head naval combat game that keeps you at the edge. With each passing turn the player attacks the ships of the opponent and the one who loses all his ships in the battle will be the defeated.
The game was basically a paper and pencil game that was developed during World War One (WW1). It was during the 60’s that the game started appearing as a board game. The game basically has four sets of 10*10 grids, two each for a player. Each grid is marked horizontally and vertically with letters and numbers so that each individual square in the grid can be identified by the letter and the number. Each player is also given five types of ships, which we have to arrange on our primary grid. It is in this primary grid that we mark the attacks by our opponent. We also have a secondary grid, where we can mark our own attack on the opponent. Apart from this, we also have two sets of pegs for marking the attacks, one set of red pegs and the other set of white pegs. Whenever the attack is spot on and hits a ship, then the red peg has to be placed. The white pegs are used when one misses his target. The game is pretty simple, but it involves some strategic and logical thinking. 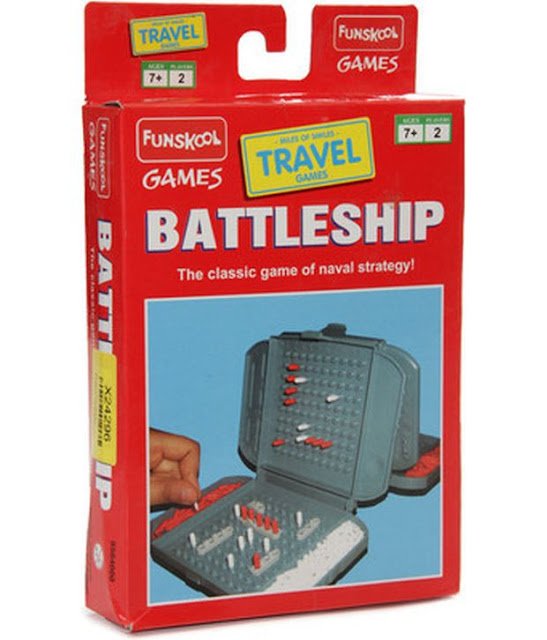 Players - 2
Goal - Sink all of your opponents ships
Setup - Each player places ships on their primary grids.
Game Rules 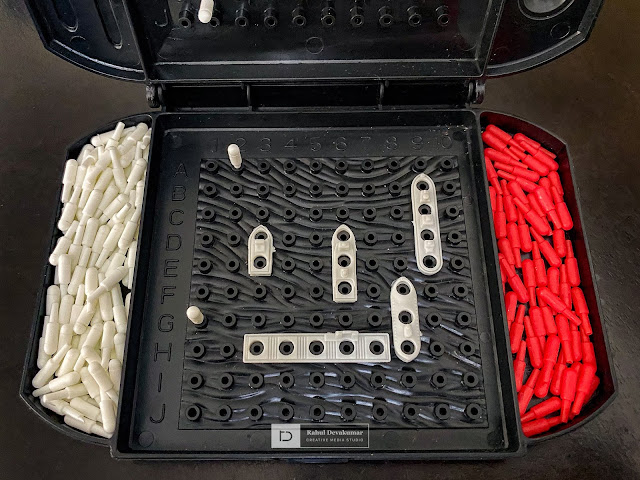 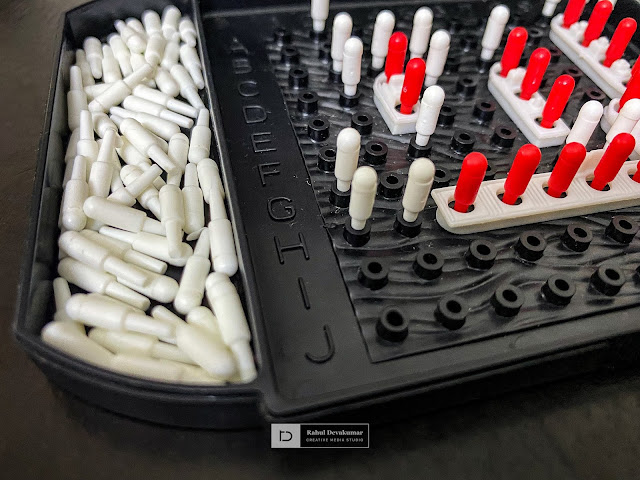 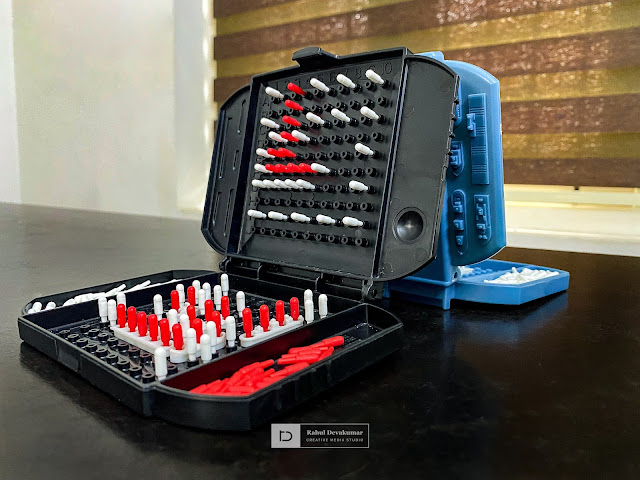 Each player should receive a battle case and five ships of varying lengths. Each ship has holes for the hit pegs to be installed.
Types of Ships
Both the players should be facing each other across a table. The target grids back up to one another vertically (secondary grid)so that none of the players can see his opponents ocean grid and ship's location. Each opponent should secretly place their five ships on the lower ocean grids (primary grid) by laying out their ships and anchoring them into the holes. Ships can be placed horizontally or vertically, however not diagonally. The ships can't hang off the grids either.
They can touch each other, but they can't overlap on the same grid space. You cannot change the position of the ships after the game begins.

Each player takes turns firing shots by calling out the grid coordinates to attempt to hit the opponents enemy ships. Call out a letter and a number that identifies a row and column on your target grid. Opponent checks the coordinate on their primary grid and verbally responds "miss" if there is no ship there, or "hit" if you have correctly guessed a space that is occupied by a ship.
Each of your shots or attempts needs to be on the target or secondary grid, the vertical upper part of the battle board case. White pegs for misses and red pegs to register the hits. Similarly when your opponent fires shots at you, each time one of your ships receives a hit, put a red peg into that hole on the ship corresponding to the grid space. When one of your ships has every slot filled with red pegs, you must announce to your opponent that your ship has sunk. The first player to sink all the opponents ships wins the game. 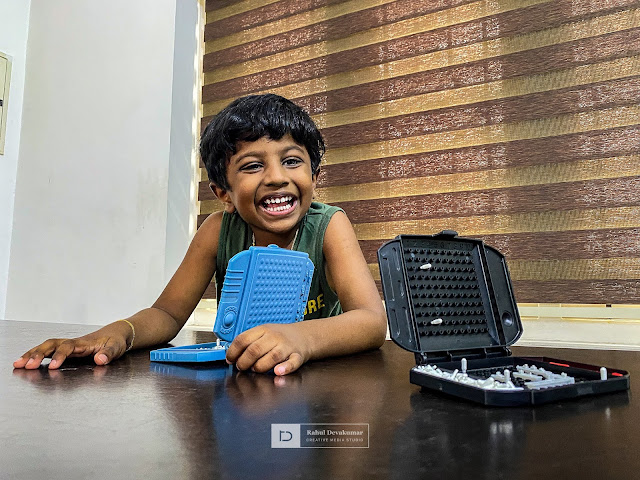 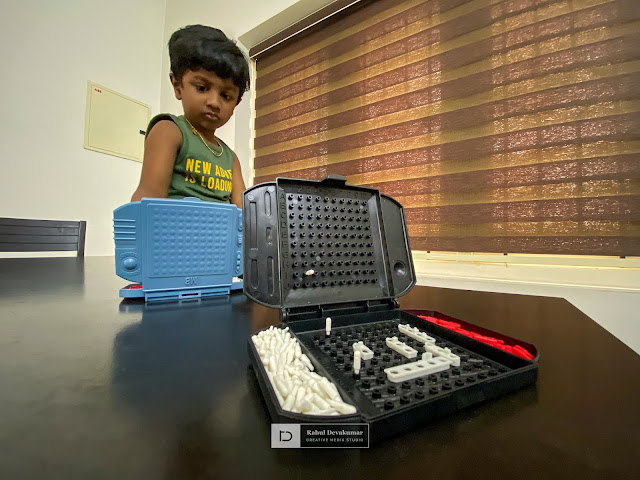 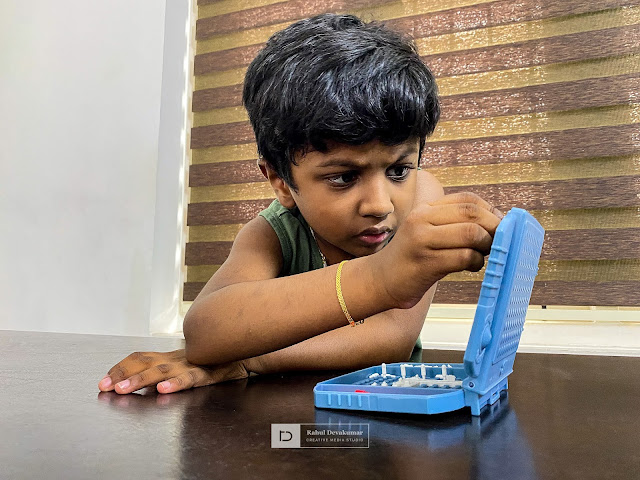 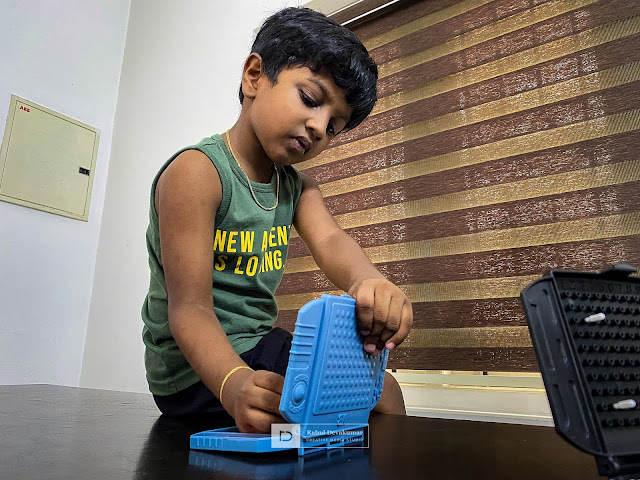 Although battleship looked like a game that our 4 year old would not be able to play, he totally enjoys playing it with of course a little help from us. In the beginning we introduced the grids to him and the relation of rows and columns. Although it may get a little overwhelming at times for them, in the beginning it was mostly just our little one sitting along and putting in the pegs. He used to really get excited if we hit a ship. Slowly he started understanding the coordinates and started having more control over his game. Not only has it made a graph more relatable to him, this is also a game of strategy, memory and logic. In each turn we take, we are trying to figure out where the opponent has placed his ships and we are trying to make a picture of that in our heads. It is important to concentrate and remember your last move, as this will help you to hit off a ship fully and in turn will aid your victory. Trying to figure out the next move, largely enhances one’s probability skills too.

Battleship is a great game for kids as well as adults. Battleships and games like this will help us to sharpen our minds. It helps us to relax and at the same time keeps us at the edge of our seats.